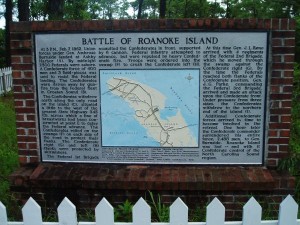 Did you know that Roanoke Island, just north of Hatteras Island, played a part in the Civil War? Drew Pullen will be hosting a free program on the 150th Anniversary of the Battle of Roanoke Island on Wednesday, February 8th at 7 p.m. at the Fort Raleigh National Historic Site and Visitor Center in Manteo. The program will last about one hour and is part of the National Park Service “Know Your Park” citizen science program.

The presentation will include details on the preparation of Burnside’s Expedition, encountering of severe winter storms near Hatteras Inlet, landing of troops on Roanoke Island, assault on the Confederate 3 gun earthwork, and the consequences of this Union victory.

A former history teacher, Drew Pullen graduated from Houghton College with a major in history and is the author of two books: The Civil War On Hatteras Island and The Civil War On Roanoke Island. Drew serves on the Board of The Friends Of The Graveyard Of The Atlantic Museum, as Chair of the “Flags Over Hatteras” Civil War On The Outer Banks Committee and a volunteer at the museum.