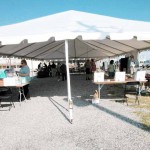 The ideal sunny weather brought out the largest crowd yet at the 5th annual Day at the Docks, a celebration of Hatteras Island Watermen, which was held on Saturday, October 19th.

Hundreds of visitors spent a beautiful late summer day wandering up and down Hatteras village’s working waterfront, looking at boats, eating, watching the various races and competitions that took place, and enjoying the bands that played all afternoon.

Following the 10 a.m. opening ceremony, there were blue crab races for children at Oden’s Dock, a concrete marlin competition (where teams of two see who can be the first to reel in a “concrete marlin”) at Village Marina, a survival suit race at Oden’s fuel dock, and a net hanging competition at Willis Boat Landing.

Through the day, several native islanders put on cooking demonstrations at the Village Marina Pavilion. Dwight Callahan marinated and grilled fish. Don Oden prepared blackened tuna, and Sharon Peele Kennedy demonstrated how to properly steam shrimp and showed all the things you could do with the leftovers.

And all of it was set to the music of Bob Zentz, a folk musician from Norfolk, Va.; Chris Bellamy, singer, charter boat captain, and Hatteras Island favorite, and The Unknown Tongues, a Cajun Zydeco band from Gloucester, N.C.

Some of the day’s most popular activities were the T-shirt painting station, the mullet toss, the annual chowder cook-off, and, of course, the kids’ fishing tournament.

But perhaps the crowd’s favorite event of the day was the annual chowder cook-off.

The results were tallied at the end of the day, and the Breakwater restaurant took home first prize for its cheesy jalapeno crab and tilefish chowder. Island Perks came in second with a traditional Hatteras-style soup, and a creamy crab soup netted the Hatteras Marlin Club an honorable mention. Around 350 people took part in the tasting, and the competition raised $2,400.

The day was capped off with the traditional parade of boats, and the annual Blessing of the Fleet, which coincided perfectly with a gorgeous sunset over the sound.

Pleased with the success, the organizers, local vendors and entertainers that made this year’s festival so successful, are already looking forward to 2010’s celebration, and another sunny, fun Day at the Docks.