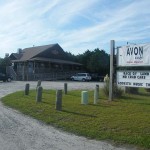 Fans of Hodad’s, the former Avon restaurant that had been around for over a decade, were surprised when a makeshift banner was placed over the original Hodad’s sign, reading “Avon Café” in the spring of 2008.

Folks were even more surprised when the marquee began advertising dishes that weren’t the run of the mill Hatteras Island seafood fare, such as rack of lamb and Maryland Crab Cakes.

While change doesn’t always come easy to Hatteras Island, the patrons who finally indulged their curiosity and decided to give this new place a try, were delighted to find that the atmosphere hadn’t changed, and the food was exceptional.

“I was always a fan of food and entertaining,” says Michael Lyons, owner of Avon Café, “and always wanted to own a restaurant, so I started looking around from Corolla to Avon.”

Corolla was quickly eliminated because of the commute, and Lyons was originally hesitant about a Hatteras Island restaurant because of the drive and his unfamiliarity with the area, but then he discovered the former Hodad’s.

“The restaurant was just exactly what I envisioned when it came to a beach restaurant,” says Lyons. “It’s not commercial, it has a sandy parking lot, a weathered building, the right size, and it gave me the option to do what I wanted inside.”

As for the food that’s gotten a lot of acclaim and attention, Lyons had help from the start. His friend and her chef son moved with him from Maryland, where they had owned a family restaurant.

The chef, Elijah Laney, helped Lyons create the menu from day one, and brought his culinary training and 13 years of experience to the table.

“I attribute everything to my chef,” says Lyons. “We put the menu together ourselves, but I let our chef control everything when it comes to the food. He pretty much runs the show, and he is responsible for the quality of the food.”

But there is one dish that Michael oversees, and that is the house barbecue.

“Barbecue is a big hobby of mine,” says Lyons, “and it’s pretty much the only part of the menu that I do.”

Avon Café’s barbecue has gotten raves, and for good reason. Lyons puts a lot of effort into the recipe to make sure it’s done well. It’s slow roasted, Apple wood smoked, and pulled, not chopped.

“You have to take your time, otherwise you’ll ruin it,” says Lyons. “I’m flattered beyond belief on the reception I’ve had on in, especially from locals and North Carolina residents. They know their barbecue, and it’s been a big hit.”

Other popular dishes at the café include fish tacos, fresh seafood including red snapper, and seafood pasta dishes such as a fusilli in a parmesan cream sauce that’s tossed with shrimp and scallops.

Lyons is also especially proud of his steaks.

“We have put a big focus on steaks, with very high quality beef, and we cut our steaks to order. Whether it’s 12 ounce, 16 ounce, or 20 ounce, we cut every steak right before we cook it, which is unique,” says Lyons.

The menu also offers Maryland crab cakes three ways — as a sandwich, appetizer, and dinner, which might seem a bit out of place on Hatteras Island.

“We’re not trying to insult anyone,” explains Lyons. “Coming from Maryland, we know a thing or two about Maryland crab cakes, and we just want to bring our own flavor.”

In the future, Lyons is toying with the idea of offering barbecue carryout, since the barbecue has been a house favorite, and maybe having an accompanying catering service.
But for now, Lyons is looking forward to continuing a successful season well into the off season.

He expects that Avon Café will be open from 4 until 10 p.m., four to five days a week through November, and Lyons plans to be open on weekends through New Year’s.

“As long as it makes sense, we’ll keep it open,” he says.

While 2008 was a hard year for businesses across the board, Lyons is grateful that Avon Café has done as well as it has.

“I would say our first year has been successful, given the economy, and the touchy first year restaurant issues. We are weathering those storms,” says Lyons.

“I’ve been delighted with the local reception,” he adds. “We’ve had so many good reviews, and we’re very pleased with it. It’s fantastic to have people come up and shake my hand and say thanks. Our goal is to get people back. If they come back more than once, we’re doing it right.”

Long lazy hours on the beach, pool parties, cookouts – all the things you love to do to celebrate  the 4th of July can be perfectly accomplished  on your Hatteras Island vacation. Let the day take you to one of  these great Independence Day celebrations! Avon Fireworks Display Surf or Sound Realty is proud to sponsor the 4th […]

The Avon Fishing Pier announces its first annual PBR Classic Red and Blue Fishing Tournament for November 7-9. In what pier manager Keith Matthews is calling “a sign of more good things to come”, the tournament will focus on Red Drum and Blue fish and cash prizes will be awarded for the top three winners […]