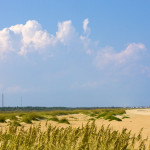 Legislation has been introduced in the U.S. House and Senate that would require the National Park Service to reinstate the Interim Off-Road Vehicle (ORV) Management Plan for Cape Hatteras National Seashore.

This was the plan that the Park Service was using to govern pedestrian and vehicular access to the seashore before a Consent Decree was signed in 2008. The Consent Decree required the Park Service to close off the majority of Cape Hatteras’ beaches during the 2008 and 2009 spring and summer seasons.
The bill (H.R. 718) was introduced in the House of Representatives in January 2009 by Rep. Walter Jones (R-NC). A companion bill (S. 1557) was introduced in the Senate on August 3, 2009 co-sponsored by Senators Kay Hagan (D-NC) and Richard Burr (R-NC). The reinstatement of the Interim Management Plan would allow reasonable ORV and pedestrian access to Cape Hatteras National Seashore while also providing appropriate protection for migratory shorebirds and sea turtles.

If you are interested in supporting or commenting on these bills, click on this link to visit a website with a tool for contacting your state’s U.S. Congressional representatives. Your response can make a difference.

Beach Access Legislation Passes in the House of Representatives

With the first day of summer upon us, we were ecstatic to hear that the U.S. House of Representatives passed H.R. 4094, a bill to restore reasonable access to the Cape Hatteras National Seashore Recreational Area. The bill, introduced by our Congressman, Walter Jones, was approved yesterday, June 19th, and passed in a 232 to […]

The National Park Service Environmental Impact Study (DEIS) for Beach Access in the Cape Hatteras National Seashore is now available to the public and open for comment. The document, according to the Park Service, “evaluates the impacts of several alternatives for regulations and procedures that would manage ORV [off-road vehicle] use and access in the […]