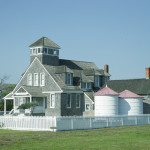 The Chicamacomico Life-Saving Station Museum Complex will be holding its Fourth Annual “American Heroes Day” on Thursday, August 6, 2008 from 10:00 AM to 3:00 PM. The complex is located in the village of Rodanthe on Hatteras Island, MP 39.5 on Hwy. 12.

The men of the United States Life-Saving Service (1871-1915) were the original rescue heroes, the “storm warriors” who made dramatic and heroic rescues of shipwreck victims whose lives were in peril from the sea. In their history, nation-wide, the USLSS’s rate of success was 99.2%, while their own loss of life, usually under the worst possible conditions, was less than 1%! In 1915, this service merged with the US Revenue Cutter Service to form the United States Coast Guard who routinely continues this tradition of heroism.

Equipment on display and/or in use includes fire engines, ambulances, police cars, Coast Guard helicopter, rescue boats, and others. There will be numerous displays, demonstrations, and exhibits as well as hands-on activities and participation events.

Any one of the “one-time events’ is worth the price of admission. The Search and Rescue Demo could be straight from the movie “The Guardian”. A Coast Guard 47-foot motor life boat will be in the ocean off Chicamacomico’s beach. It plays the role of a vessel in distress with a man overboard. An HH-60 Jayhawk helicopter arrives, circles, locates “victim” in the water, hovers, and then a rescue swimmer jumps from the helo into the ocean. Then he assists the victim into the basket and is hoisted into the Jayhawk and then whisked away to safety. Three different methods are demonstrated.

The jet-ski water rescue is another simulation. There are professionally trained local volunteers who can be on the scene of a water rescue in a dramatically short amount of time.

The Beach Apparatus Drill is a historic reenactment of a rescue method used by the U.S. Life-Saving Service. It involves a large two-wheeled cart filled with life saving equipment or “apparatus”, the firing a projectile with a black-powder cannon to get lines to a stricken ship (the “wreck pole” in the drill simulates the mast of a ship) and then sending out equipment to save the lives of those on board, one soul at a time.

The Beach Apparatus Drill, commonly referred to as the Breaches Buoy Reenactment, has long been Chicamacomico’s most popular program. Chicamacomico is the only place in the nation to do the full Drill reenactment on a regular basis! And to top it off, the Drill Teams are all volunteers of active-duty US Coast Guard personnel. It is performed every Thursday at 2pm during the summer.

And for the flyover at the closing event, at press time it was unconfirmed how many F-18s there would be. A formation was requested. So stick around to the very end for more surprises.

This is a fund-raising event for the non-profit 501c3 Chicamacomico Historical Association so that it may continue these kinds of events and keep the history of heroes alive. For a complete schedule of events, click here.