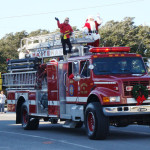 The Hatteras Village Christmas Parade enjoyed a sunny start on Saturday, Dec. 13, with cool 50 degree weather and an even cooler breeze. But the chill in the air didn’t stop several hundred locals and visitors from lining along NC Highway 12 in between Teach’s Lair marina and the Hatteras Drive-in to cheer on the floats.

There were Thirty-one parade entries, led by Dare County Sheriff Rodney Midgett, the parade’s grand marshal. The participants ranged from elaborate floats to vintage cars and motorcycles, and trucks from all of the island’s volunteer fire departments. The Hatteras Island Rescue Squad appeared with their truck, as did the Cape Hatteras EMC, and the Coast Guard made an appearance toting a boat along the parade route. In between the floats and big trucks, kids on bikes and dogs and their owners walked alongside the parade.

Standout floats included Buxton’s Conner’s Supermarket, which celebrated their 50th anniversary with a giant birthday cake and accompanying sign which read “On our 50th Christmas, we wish you a Merry Christmas” and the Cape Hatteras Angler Club’s float which reminded onlookers that “bingo and barbecues = community and scholarships.”

After the parade, most people, participants and spectators alike, headed to the Hatteras Village Civic Center for hot chocolate and sweets and the presentation of the awards.

The winners of the three $250 awards for floats were:

Organizers agreed that the parade was one of the smoothest and best attended in memory, thanks to the chilly but beautiful weather, and everyone looks forward to doing it again in 2009. 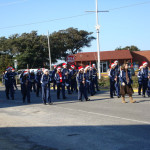 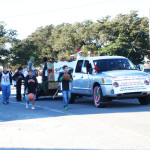 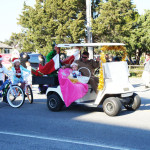 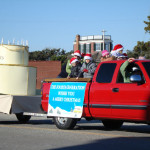 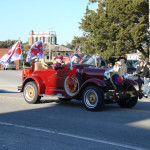 This Saturday was a beautiful cool sunny day – perfect weather for the annual Hatteras Village Christmas Parade! This mile-long traditional parade brings out neighbors, businesses and visitors full of holiday cheer and a real sense of community. Among the school marching band, the police departments, churches, horse stables and fire engines were the Surf […]

The holidays are just around the corner, and on Hatteras Island, ’tis the season to celebrate with friends and family with a variety of upcoming community events. If you’re in the Outer Banks area, check out these festive activities that are open to everyone, and get a jump start on generating a little holiday spirit. […]

The annual Hatteras Village Christmas Parade and dance will ring in the season on Saturday, Dec. 12, in Hatteras village. This annual event is sponsored by the Hatteras Village Civic Association, and features floats, music, and participants from all along the Outer Banks.