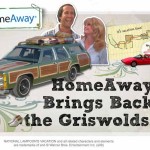 “The Griswolds have always been America’s first family of travel, and the broad popularity of the Vacation movie series still continues today,” says Brian Sharples, founder and chief executive officer of HomeAway. “We intend to have a lot of fun with the ad campaign, highlighting the travel mishaps that always seem to follow the Griswold family, while also promoting the value and benefits of vacation rentals as an alternative to hotels.”

Chevy Chase and Beverly D’Angelo portrayed Clark (“Sparky”) and Ellen Griswold in the popular film, which was written by John Hughes and directed by Harold Ramis. In the movie, Clark and Ellen Griswold take their children, Rusty and Audrey, on an ill-fated, cross-country road trip in the “Wagon Queen Family Truckster.”

In addition to signing Chase and D’Angelo up for the new campaign, HomeAway recently purchased an exact replica of the Family Truckster for use in the campaign, as well as for promotional marketing activities that will launch next year. “The Truckster got pretty beat up in the movie, but we plan to keep ours in good shape so we can take it around the country to visit some of our top vacation rental markets,” Sharples says.