this Friday night! Purchase your tickets for the second Cape Hatteras Lighthouse Full Moon Tour of the month!
Tickets should to be purchased in person at the lighthouse ticket booth in Buxton between 8:15am and 5:40pm. Tickets are $7 for adults and $3.50 for children. Be sure to bring your flashlight for the climb. 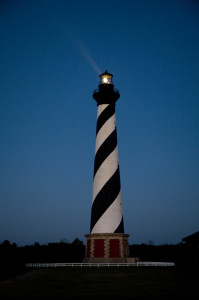 Did you know that the month of August boasts two full moons? The first full moon (Full Sturgeon Moon) fell on the very first day of the month and the second full moon falls on this Friday, the very last day of the month. Friday’s full moon is known as the Full Red Moon, an Algonquin name.
Many people know of the second full moon in a month as the Blue Moon, which only occurs approximately every 2.5 years or “once in a blue moon,” and therefore is not to be confused with August’s Full Red Moon. The blue moon obtained it’s name due to it’s blue tint when seen through atmospheric layers of smoke or volcanic dust.

In case you didn’t catch the first full moon of the month, August is proud to bring you another, so be sure to bask it’s it glory (at the top of the Cape Hatteras Lighthouse)!