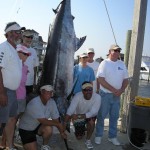 The Hatteras charter boat Gambler, captained by Steve Garrett, took the top prize money in the 16th annual Hatteras Village Offshore Open Fishing Tournament. Fishing days were from Wednesday, May 12, through Saturday, May 15.

Thirty-six boats fished in this year’s tournament, the first event in the North Carolina Governor’s Cup.

Steve Garrett, the winning captain, said he was fishing 38 to 45 miles offshore to get to the Gulf Stream and good fishing conditions. Normally, he said, those conditions are about 25 to 30 miles offshore.

Garrett was fishing with a group of anglers from Roanoke, Virginia and two mates – Dita Young and Darrin Callahan.

The captain said the Roanoke group usually charters his boat for the Big Rock Tournament, which is next month in Morehead City. The group that usually charters the Gambler for the Hatteras village tournament decided not to come this year, so Garrett called his Roanoke clients, who were only too happy to come to Hatteras for the tournament.

Other winners in the tournament were:

The entrants in the daily meat fish division split $13,175 in prize money. They were Impulse, Frequent Flyer, Sea Toy, and Brothers’ Pride.

In all, anglers caught six white marlin, 13 blue marlin, and two sailfish. All but three of the blue marlin were released.

Get Ready for Fall Fishing Tournaments

One of the great things about fall on Hatteras Island is the fishing, and this is exactly why so many fishing tournaments pop up in the September, October and November months for anglers of all ages and skill levels. While planning your fall vacation, whether you’re an old fishing pro who’s ready to win big, […]