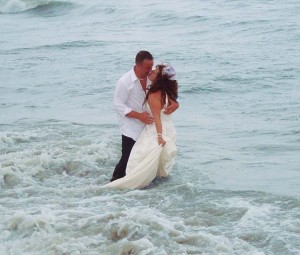 Brian and Melissa had come to Hatteras Island expecting a low key but lovely wedding with their relatives and minister at the Cape Hatteras Lighthouse, but as the day arrived, they discovered the disheartening news that nobody in their party except for their niece, daughter, and the bride’s brother and sister-in-law would be able to come.

With a permit in hand, but without anyone to perform the ceremony, the couple was stuck.

Hearing their sad story, Molly Miller, who works at the Buxton motel where they were staying, decided that something had to be done.

Jamie Hampton, Housekeeping Manager for Surf or Sound Realty’s Avon office and Molly’s daughter in law, recalled the events that happened next. “She [Molly] went online and became ordained in a matter of minutes. It was pretty amazing.”

Molly then called Jamie and relayed the story, and mused out loud that it was too bad that there wouldn’t be more people at the ceremony. “I said I’d ask some girls from work if they’d like to go,” says Jamie.

As the story spread through the office, everyone felt sympathy for the couple and one by one decided to step up and help in whatever way they could. Paula Reinard brought a cake, Marcia Laricos brought champagne, Lisa Brooks Hill brought the camera to take amazing photos, and Ginger Campbell and Vicki Langhel showed up in matching outfits, with a guitar and a mandolin, ready to supply the music for the ceremony.

“The groom asked if they could play ‘Somewhere over the Rainbow’, so they learned it as quickly as they could,” says Jamie. “Later, as the bride was stepping out of the car, she said it was too bad no one was there to play music, and then she heard the music in the distance, and she was just freaking out. It was pretty cool.”

John Baust, husband of Surf or Sound’s Susan Baust, even offered the bride his elbow to escort her down the aisle.

After a quick 10 minute ceremony, the bride hopped over to the beach. She had determined long ago that if they were getting married in Hatteras, she was going to jump into the ocean after the ceremony. “She said it was just a dress, and it was part of her plan all along, so she went over there and did it.”

For everyone involved, the ceremony and subsequent dip in the ocean was a true joy, and everyone in attendance was delighted with the results of what could have been a sad situation.

“They [the couple] said that it couldn’t have gone better if they had planned it,” says Jamie. “They were thrilled, surprised, touched, and very grateful, and we were just happy we could help.” 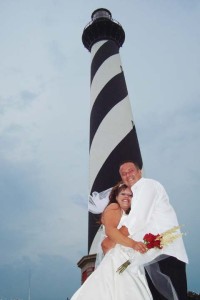