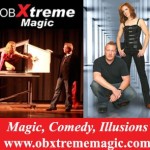 The Outer Banks is a magical place. The Outer Banks offers peace, natural beauty, friendly people and a number of things to do…but this summer there is a new kind of magic in town.

OBXtreme Magic features the illusion team of Clive Allen & Tracy Housley, originally from Pennsylvania but now new residents of the Outer Banks. During the OBXtreme Magic show, participants will witness incredible illusions, mind-bending magic and comedy appropriate for all ages. Audience members are invited on stage to be part of most acts and are spell-bound as people appear, vanish and float in the air right in front of your eyes!

Clive Allen and Tracy can be seen throughout the Outer Banks this summer. Magic and comedy shows will be performed at the Hilton Garden Inn in Kitty Hawk, the Outer Banks Music Showcase in Kitty Hawk, at Kelly’s Outer Banks Restaurant and Tavern in Nags Head, and at Roanoke Island Festival Park in Manteo. Summer magic camps will also be available at the Whalehead Club of Corolla.

OBXtreme Magic, the family friendly version of the couple’s magic and comedy show can be seen most Wednesdays and Thursdays at the Hilton Garden Inn in Kitty Hawk, and with special guest appearances at the Outer Banks Music Showcase in Kitty Hawk, and Roanoke Island Festival Park in Manteo. Watch in amazement as Clive makes an audience member float, see things disappear, watch Tracy escape from a straightjacket, and learn a few tricks to show your family and friends. Tickets for the family show are Tickets for the family show are $20 (adults), $18 (seniors), $7 (children). A complete show schedule of the OBXtreme Magic shows can be found at www.obxtrememagic.com

After dark on Tuesday and Wednesday nights, the couple takes the show to a new level. While still rated R, the Mad Jack show features hilarious comedy, amazing magic and bizarre and edgy side-show stunts you will never forget. This show contains adult language and subject matter and is not for the easily offended. $20 per person for those 18 years of age and older. Shows are performed at Kelly’s Outer Banks Restaurant and Tavern in Nags Head on Tuesdays and at the Hilton Garden Inn in Kitty Hawk on Wednesdays.

And children shouldn’t miss out on learning a magic trick to show their friends. Ages 5 and up can experience the wonder and learn the secrets of magic with the star of OBXtreme Magic, world-renowned magician Clive Allen Tuesdays throughout the summer! Only $15 per participant includes everything you need to amaze your friends! Please call the Whalehead Club at (252) 453-9040 for more information and to register.

Clive Allen & Tracy have been professionally entertaining audiences around the world since 1987 with their unique combination of world class slight of hand, comedy audience participation and grand illusion.

“My grandfather was a magician in England and was successful even though he died when I was a young boy of seven,” said Clive. “Later when I was 15 years of age, I saw a magic show on television that showed you how to do a magic trick. I practiced it that night and performed it for my friends in school the next day.”

Everyone was amazed at Clive’s trick and he loved the response he received from performing it. This peaked his interest and left him wanting more of this newly found fame.

Since then, Clive Allen & Tracy have taken their audiences through a roller coaster ride of emotions with their incredible talent and sincere performing style. They have entertained audiences around the world and have been seen on both U.S. and international television. They have appeared at The Emmy Awards, Ceasar’s Resorts International, Resorts USA, and were selected as one of the top ten magicians from the U.S. and Canada to perform at Magicfest 2000 in Singapore, the largest magic production in that country!

For a video preview of their show, their 2009 show schedule, or to make your reservations for any of the shows, visit www.obxtrememagic.com or call (252) 489-9219. Tickets can be reserved with a pay pal account or credit card on-line or at the door prior to showtime. Discount coupons are available on the website.