Serendipity, the home that was the setting for the Richard Gere and Diane Lane 2008 movie Nights in Rodanthe, is getting ready to make her move.

The home, which was located perilously close to the ocean, will be moving further south to a safer location. On the morning of January 15th, spectators and news crews came out to see Serendipity. The home was lifted off of its pilings, ready for transport, and trucks were adding sand in front of the home to make the move easier.

The movers, the same company responsible for moving the Cape Hatteras Lighthouse in 1999, will attempt to move the home during low tide, at 1:00 p.m. If conditions do not allow, the move will he postponed to Monday.

Stay posted to our blog for more updates, pictures and video as Serendipity makes her trip down the beach! 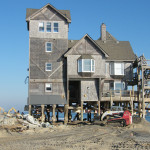