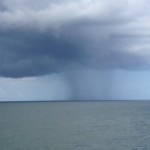 On February 21, 1854, a 250-ton barkentine, Orline St. John, was dismasted in a strong gale off of Cape Hatteras. As heavy seas battered the large vessel and its crew, many people tried to seek refuge out of harms way. Concerned with their safety, several crew members tied themselves to the rigging in hopes of not being swept overboard. After the storm passed, the crew was left to fend for themselves for about 10 days before they were rescued. Unfortunately, four crew members did not return home.

Barkentine : a sailing ship of three of more masts with the foremast square-rigged and the others fore-and-aft rigged