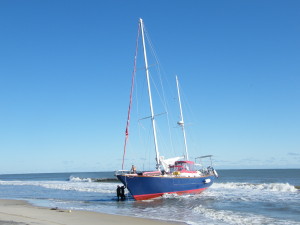 This week, an unfortunate sailboat became the latest victim to the hazardous shoals of the Hatteras Island coast, often referred to as the Graveyard of the Atlantic. The sailor is fine, and efforts are being made to salvage the boat from the beach. Photo taken by Joy Crist of Surf or Sound Realty.

It’s that time of year again! Days on end of a strong “blow”, as native islanders would call it, tends to expose treasures that have remained hidden from the salty elements for many years. Whether you are in search of miles of phenomenal shelling, a scattering of sea glass, or treasures washed ashore from shipwrecks […]