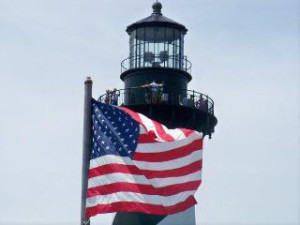 US Flag at Cape Hatteras Lighthouse by Charles B. Richardson

We can’t think of a more iconic image to represent summer in America than this picture submitted by Charles B. Richardson. The US flag waves proudly in front of the Cape Hatteras Lighthouse, also known as “America’s Lighthouse”. The lighthouse opens for climbing on April 20th. Make plans to stop by this main attraction while you’re on the island.