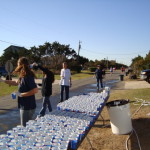 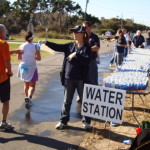 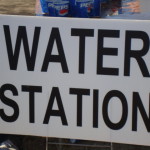 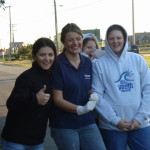 At 5:30 a.m. on Sunday, a group of Surf or Sound Realty staff members met at Jockey’s Ridge State Park at the corner of the 4-lane bypass in Nags Head. Cheerful, but somewhat sleep deprived, these folks quickly got to work setting up tables, lining trash cans, setting up fishing poles and beach chairs on the side of the highway, and filling up about 4,000 cups of water, give or take a few.
Had these Surf or Sound Realty employees lost their minds? Believe it or not, the answer is no. These volunteers and their families were setting up a water station for the 3rd annual Outer Banks marathon.
Surf or Sound Realty was proud to be Hatteras Island’s only official sponsor of the marathon, having a themed water station set up at mile 2 of the half marathon, and mile 15 of the full marathon. Deciding on an “island’ theme, (because what else do you get when you combine water and the beach?), the Surf or Sound team set up a typical beach scene along the bypass, with a Surf or Sound truck, a kayak, a surf board, a few towels, beach chairs, fishing poles, and of course, a little reggae music in the background.
Along the bypass, the team also set up a number of balloons and signs of encouragement to give the runners a boost. Naturally, to go with the beach theme, all of the signs had an island twist, like “We’re Shore you can do it!” and “Isle see you at the Finish Line!”
By the time the first runners ran into view, the set-up was complete, and the team had quickly refueled with coffee and donuts.
Setting up the beach scene was easy. The true challenge was to pass out thousands of cups of water to thirsty runners as they passed by, while not spilling or dropping the cups. It sounds simple, but as dozens of runners swarmed by in packs, it was tricky to hold out a cup for a runner to grab, and then quickly replace it with another cup for the next one. (As a comparison, think about holding up a piece of bread for a seagull to snatch out of your hand… now think about doing that a few thousand times.)
Once the volunteers got into a rhythm, the job became a breeze, and the team was able to concentrate on one of the most important aspects of manning a marathon water station: cheering their heads off.
Vanessa Paxton, who had plenty of yelling experience from her former work at the Virginia Beach Amphitheater, helped lead the chorus of “WOOOOOOOOOOOOOOOO! WATER!!!!!! WE HAVE WATER HERE!” and the rest of the team joined in, shouting encouragements, commenting on runners’ costumes, and yelling “You’re Welcome!” to all the runners who were able to say thanks. Everyone agreed that after running for miles, it was truly impressive that these runners were so polite and gracious.
Lisa Latham and Melvin Stone’s families did a phenomenal job of not only filling up and passing out water and yelling encouragement at the runners, but also keeping the water station area remarkably clean. After the first pack of half-marathoners, the street in front of the station looked like a sea of blue paper Pepsi cups, but somehow, the team was able to clear the area for the next pack of runners that came whizzing by.
By noon, all the runners had passed on their way to the finish line in Manteo. After the last runner had grabbed their cup of water, everyone was a little tired, extremely hoarse, but quite happy with a job well done. There’s something very satisfying about being able to give water to a hoard of very thirsty people, and watching so many people all chugging along is indeed a one-of-a-kind experience. Everyone congratulated themselves and agreed that the day had been a smashing success, and already the team is gearing up their excitement, and their voices, for next year.

Custom Facebook Cover Photo – I’d Rather Be at the Beach!

Would you rather be sitting in the warm sand than shoveling snow? Download one of our custom images to use as your cover photo and let everyone know, “I’d rather be at the beach!” Just click on the image to view it at full size, right click to save and upload it as your cover […]

The National Park Service has announced that they will begin issuing 2013 annual Off-Road Vehicle (ORV) permits on Saturday, December 1st and weekly permits on Tuesday, January 1st. ORV permits can be obtained at any of the three NPS ORV permit offices located at Coquina Beach, the Cape Hatteras Lighthouse Visitor Center (Buxton), and the […]

U.S. News and World Reports has ranked the Outer Banks as the Top Family Beach Vacation in the USA! It’s official! The Outer Banks is the place to come to truly vacation! Miles and miles of vast, unspoiled beaches await you on this slender stretch of barrier islands. There is beauty around every bend and […]