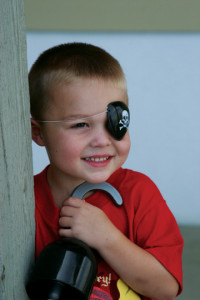 This is a time to celebrate, mates, and on Hatteras and Ocracoke islands where we’re no strangers to the legacy of pirates, it would be a disservice to our communities not to celebrate with enthusiasm.
The history behind Talk Like a Pirate Day is just as delightfully silly as the holiday itself. According to the holiday’s official Web site, appropriately named www.talklikeapirate.com, the holiday was invented by John Baur and Mark Summers on June 6, 1995.

For reasons unknown to the inventors, on that date they began talking in pirate slang during a routine game of racquetball, and found the digression into pirate lingo entertaining and fun. They then decided to parlay this phenomenon into a new world holiday. The date Sept. 19 was chosen because it was Mark’s ex-wife’s birthday, and the only date that came to mind at the time, besides Christmas and Superbowl Sunday, which obviously were already taken.

For the first seven Talk Like a Pirate Days, the holiday was honored only by the inventors and a few of their very tolerant friends. The inventors soon realized that they needed a spokesman of stature to carry their celebration of pirate-slang to a world audience — someone who was respected, intellectual, and could give the holiday the legitimate and revered reputation that it deserved.

They decided on national humor columnist Dave Barry, a name they actually passed around on the day of the racquetball game when the holiday was born. Dave Barry paid homage to the holiday in a 2002 column, and the head-scratching Talk Like A Pirate Day spread across the nation.

The only very minor concern for folks who want to accurately celebrate the holiday is that pirates did not actually talk the way that Jack Sparrow does. In fact, according to Kevin Duffus, award winning filmmaker, historian, and author of the acclaimed new book “The Last Days of Black Beard the Pirate,” pirates technically didn’t have their own dialect.

“The popular culture perception of how pirates talk is based on Hollywood movies, and typically producers don’t do a lot of research when they write a pirate film,” says Duffus. For example, the growling “Arrrrgh” that Johnny Depp does so well was never really used in pirate conversations. “They talked like a typical British sailor of the time, so you would not be able to differentiate between a pirate and a British mariner.”

But happily, quite a few pirate or mariner terms are legitimate, and most people are talking like a pirate every day without even realizing it.

For example, a “square meal” is technically a pirate term, as mariners used to eat meals on square wooden platters. Believe it or not, “barbecue” is a pirate term too, originating from the buccaneers of the West Indies who pioneered the art of roasting meat over fire.

And despite the silly premise and inadequacies of some of our favorite pirate terms, pirate expert Duffus gives Talk Like A Pirate Day his seal of approval.

“I think there’s so much more to pirate culture and pirate society than popular culture realizes, and anything that promotes the deeper study or understanding of it is worth while.”

So fellow lovers of the fractured English language, start practicing your “ayes” and your unintelligible curse words, and join the thousands people around the world who proudly pay homage to International Talk Like Pirate Day. Aye.

Here’s a list of genuine pirate / mariner terms, courtesy of Kevin Duffus, to buck up your vocabulary so you can properly celebrate Talk Like A Pirate Day — and, more importantly, completely confuse your friends.

Bilge rat — a derogatory term as in, “you scurvy bilge rat.”

Shiver me timbers — an exclamation of surprise, as when a ship hits something causing everything to shake.

Touch and go — refers to briefly running aground, or two ships coming aboard to transfer mail or passengers, both risky propositions.

Pipe down — most 18th century ships had a lights-out rule, indicated when the bosun’s pipe sounded. Even pirate ships had a set time when those who were not on watch were expected to go to bed.

Mind your Ps and Qs — refers to tavern keepers who would extend credit to sailors and would keep track of how many pints or quarts of ale their customers consumed.