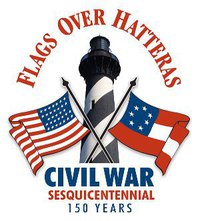 Did you know that Hatteras Island played a role in the Civil War? Find out about our contribution during the FLAGS OVER HATTERAS Sesquicentennial Event April 26th – April 29th , 2012. There will be nationally known authors and historians speaking each evening along with living history events and historical exhibits at the Graveyard of the Atlantic museum. If you won’t be here during the event this week, the artifacts will be on exhibit at the museum through the end of July.

Each evening one of them will give their talk following dinner (included in registration fee) at the Hatteras Village Civic Center in Hatteras.

Civil War Historical Marker Unveiling and Dedication: April 26 at 4 p.m. at the Graveyard of the Atlantic Museum in Hatteras

The Flagship USS Minnesota and the Hotel De Afrique will be recognized with the unveiling of a Dare County Heritage Trail / North Carolina Bugle Trails Marker in honor of the leadership, actions, and results during and after seven U.S. Navy warships bombarded Forts Hatteras and Clark, August 28 -29, 1861.

The dedication recalls the USS Minnesota was the flagship for the Atlantic Blockade Squadron commanded by Flag Officer Silas H. Stringham. Using Stringham’s innovative maneuver of having his ships sail in single file oval formation the fleet rained down several thousands of shells. Seven African American sailors who were mustered into service in Boston, Mass. manned the forward gun on the USS Minnesota during this engagement. This was the first time the U.S. Navy employed this tactic.

Placement of wreaths will include a US Coast Guard Color Guard from USCG Sector Cape Hatteras and Bernie Siler, Historian and re-enactor with the 54th Massachusetts. The public is encouraged to attend.

All programs are free of charge and are open to the public. A schedule of programs will be provided.

Come early to get your bid number and a front row seat. Donations of any and all auction items are welcome. They do not need to have anything to do with the Civil War. Items already on the auction block for lucky bidders to win range from rental cottage discounts to many other exciting items. Click here for a list of the auction items

All proceeds will go to the Friends of the Graveyard of the Atlantic Museum to defray any costs of Flags Over Hatteras activities and the remaining or all will go towards the “Help Us Save the USS Monticello Ensign” Civil War flag restoration project.

Civil War Exhibit: Graveyard of the Atlantic Museum in Hatteras

“War Comes to Hatteras” Exhibit is open at The Graveyard of the Atlantic Museum, 59200 Museum Dr., Hatteras, NC. This special exhibit is open to the public, free of charge, in connection with the “Flags Over Hatteras” Conference (a ticketed event) and related events. Non-ticketed public will be subject to museum admission.

This exhibit will feature items and documents related to Eastern North Carolina activities and actions during 1861. The exhibit is focused around the Battle of Fort Hatteras and Fort Clark, Aug. 28-29,1861 and will also explore “The Capture of the Fanny” and “The Chicamacomico Races” in October of the same year.