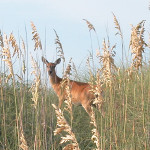 While summertime visitors are treated to the laughing gulls, mole crabs, and other coastal critters that enjoy Hatteras Island when it’s warm, winter visitors have an opportunity to observe some of the more timid and elusive Hatteras Island residents. When the beaches and coastal areas are deserted, and when the weather is chilly enough for these cold natured animals to thrive, an unusual group of island critters make a dramatic appearance.

Where you’ll see them: Lounging on the beach, close to the water.

Why they’re here: Seals are frequent visitors in the winter months when the beaches are deserted. The seals that frequent Hatteras Island are typically younger “teenage” seals that are coming out of the water to rest and take a break from searching for food. Feel free to stand at a distance and take photos, but try not to get too close. While seals might look sweet and friendly, they are wild animals and can either bite approaching visitors, or head back into the sea, foregoing their much needed break out of the ocean.

Where you’ll see them: The dunes, the maritime forest, and everywhere in between

Why they’re here: Deer can be spotted on Hatteras Island year-round, particularly in the Buxton and Frisco woods, and on the park service grounds by the Cape Hatteras Lighthouse. But in the winter months, when the human population is scarce, the deer become particularly brave and can be seen just about everywhere. Take a trip towards South Beach by the lighthouse, and you might just see a deer family or two that won’t only be bravely close, but will actually look at you with annoyance for intruding on “their” turf.

Where you’ll see them: All beaches, but on occasion you can spot hundreds if not thousands near Cape Point or by the inlets.

Why they’re here: Like seals, with fewer humans on the beaches, birds can easily head to shore to take a break from flying and feeding over the ocean. Cormorants, large dark birds that rarely spend time on land and can barely walk, will rest close to the beach in the water, or if they’re exhausted, rest on the sand.

A word of warning to visitors: If The Birds gave you the creeps, then perhaps you should avoid the beaches in winter, particularly near Cape Point and Hatteras Inlet. When the beaches are chilly and deserted, hundreds, if not thousands of Herring Gulls are known to congregate in one location. The sight of thousands of feathers and beaks makes a beautiful photo, but one can’t help but think if these birds realize that they have you outnumbered…

Where you’ll see them: Living it up in the ocean breakers close to shore

Why they’re here: The Outer Banks is home to dolphin all year long, but their population seemingly increases in the off-season when bottlenose dolphin from northern waters head to Cape Hatteras and further south for the winter. Stare at the ocean long enough, and chances are you’ll spot a few of them riding smoothly along the waves, or splashing frenetically in the water, feeding on smaller schools of fish.