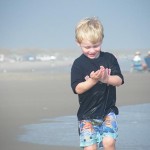 After a relaxing walk along the soundside of Avon, I nearly jumped out of my flip flops when I spotted a giant slimy fish with big droopy eyes looking up at me from a shallow canal. He was flat like a flounder, but a dark greasy brown, and had a wide mouth with pointy little teeth that were fixed in a dopey smile. Naturally, as with all things that I don’t understand, I poked at it with my index figure, and sure enough it twitched slightly with annoyance, but didn’t really move, and didn’t lose its dawdling grin.

Now completely confused, I grabbed a neighbor friend to come over and look at my new discovery. “Is it OK?” I asked him, worried. He looked at the ugly little creature, puzzled, and replied “I don’t really know what OK looks like.”

We never quite figured out what the creature from the deep was – our best guess is that it was some sort of monkfish or allmouth, but regardless, my slimy friend is just one of the unusual creatures that calls Hatteras Island home. Naturally, with miles of canals, sound beaches, ocean tidal pools, marshes, and a hundred different eco-systems in between, Hatteras Island attracts some weird creatures that would more aptly belong in a prehistoric era or a science fiction movie.

Mole Crabs: Head down to the shoreline, right at the edge of where the waves are washing in, and start digging. Chances are that sooner or later you’ll notice small pink little crabs digging next to you. These little critters are called “sand diggers” or mole crabs, and they are perfectly harmless. With a hard sandy gray shell and pink sides and belly, these guys don’t look like an everyday crab, but with their 8 small legs that are almost always moving, they can burrow into the sand with the best of them, looking for food, or simply a temporary shelter from the crashing waves.

Look underneath, and you’ll spot their legs their small antenna, and on some mole crabs, a bright orange spot. Believe it or not, this orange clump is an egg sack carried by the female mole crabs in the summertime. It’s fine to pick them up and put them back down to watch them furiously dig into the beach, but be careful – these little guys might be fast, but their shell is very delicate.

Fiddler Crab: These deformed looking crabs are quite unique as, unlike the majority of crabs, their dominant two claws are different sizes. One claw is small and used for picking up small chunks of sediment and eating, while the other claw is gigantic, perfect for warding off predators, or at least for showing off and posing a threat. Fiddler crabs can be found in small muddy sections of the sound and soundside canals.

While hard to spot, you best chance of finding a live moon snail is along the shoreline of gradually sloping beaches, like Frisco and Hatteras. The shells, however, wash up all along Hatteras Island.

Skates / rays: The ocean waters off of Hatteras Island are home to five different species of skates, which can be spotted in the waves, and on occasion, literally jumping out of the water. These flat, kite shaped creatures can grow to huge sizes, with a width up to 22 feet. However, the more common skates are smaller bottom dwellers which shy away from humans, and skirt through the water at amazing speeds. Though they should be left alone, skates are generally harmless. In fact, the NC Aquarium in Manteo has a “touch tank” exhibit where not only can you see a skate up close and personal, but you can touch it as it flies by.

You also might find skate egg cases washed up on the beach. These black, leathery pouches, with curly black tendrils on the corners look a little scary, but they’re an interesting beach find and perfectly fine to take home as a strange souvenir.

The wonderful thing about Hatteras Island is that whether you’re in the sound, the ocean, or in your own backyard, there’s always a new creature to discover, and even frequent visitors and longtime locals occasionally have the pleasure of stumbling upon a critter they’ve never seen before.

In my case, I know my walks along the sound have become more interesting, as my eyes are always wandering for my odd new little friend, hoping for another pointy-teethed smile.

Long lazy hours on the beach, pool parties, cookouts – all the things you love to do to celebrate  the 4th of July can be perfectly accomplished  on your Hatteras Island vacation. Let the day take you to one of  these great Independence Day celebrations! Avon Fireworks Display Surf or Sound Realty is proud to sponsor the 4th […]

The Avon Fishing Pier announces its first annual PBR Classic Red and Blue Fishing Tournament for November 7-9. In what pier manager Keith Matthews is calling “a sign of more good things to come”, the tournament will focus on Red Drum and Blue fish and cash prizes will be awarded for the top three winners […]