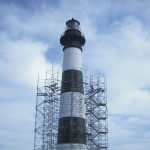 The Bodie Island Lighthouse, located in the Cape Hatteras National Seashore just north of the Bonner Bridge, is getting a much needed and long awaited facelift.

The $2.8 million project to restore and refurbish the lighthouse got underway late last year and is expected to take about 18 months. END_OF_DOCUMENT_TOKEN_TO_BE_REPLACED