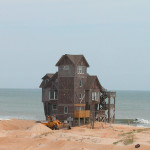 Portions of the movie were filmed in Rodanthe in 2006, and residents and frequent visitors alike will recognize a number of local landmarks, including the Rodanthe Pier, and “Serendipity,” the most northern home on Hatteras Island and the setting of the fictional bed and breakfast where the movie takes place. END_OF_DOCUMENT_TOKEN_TO_BE_REPLACED